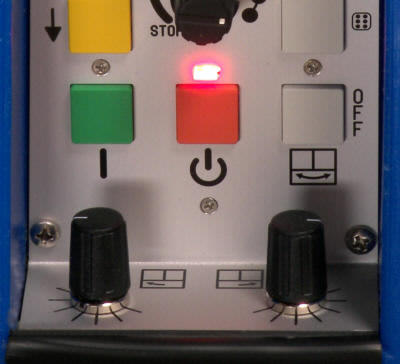 Silent Partner STAR and PRO also feature a programmable oscillating mode. In this mode, the ball machine alternately plays two (three in case of the PRO) user-defined throwing targets parallel to the baseline and according to the settings you have selected (ejection speed, spin, ejection angle and ball frequency).

With the STAR you have the choice between two variants, called 'narrow' and 'wide'.

The ‘Narrow' mode is suited very well for training an alternating play between forehand and backhand with one more or less large sidestep each, for instance. In position 'wide' two shot positions close to the singles sidelines of the court are played - good for training from the barrel. By varying the position of the ball machine, the angles can be modified within certain limits.

By means of two additional controls (in the picture on the right at the bottom edge) the PRO allows not only the choice of two variants for the thrown targets, but also combinations of 17 positions. The detent of the controls allows to reproduce once found positions fast and without new adjustment effort. The programmable swivel mechanism of the PRO model opens up many additional training possibilities, such as alternating backhand / forehand training with any step combination in advance, optimizing the ball game from certain positions, improving footwork in general and much more. Furthermore the PRO offers the possibility to play 3 different positions in a row (right-middle-left). This setting is not only good for the training of 3 students, but opens up many more training possibilities due to the free adjustability of the outside positions. Take advantage of the extensive possibilities of one of the most flexible, programmable swivel units on the market!

With all this, we always make sure that our machines remain practical and can be adjusted both easily and quickly. After all, we are also users of our ball machines ourselves and do not want to spend our time with tedious and laborious adjustment work. We have already seen some ball machines and know what we are talking about.